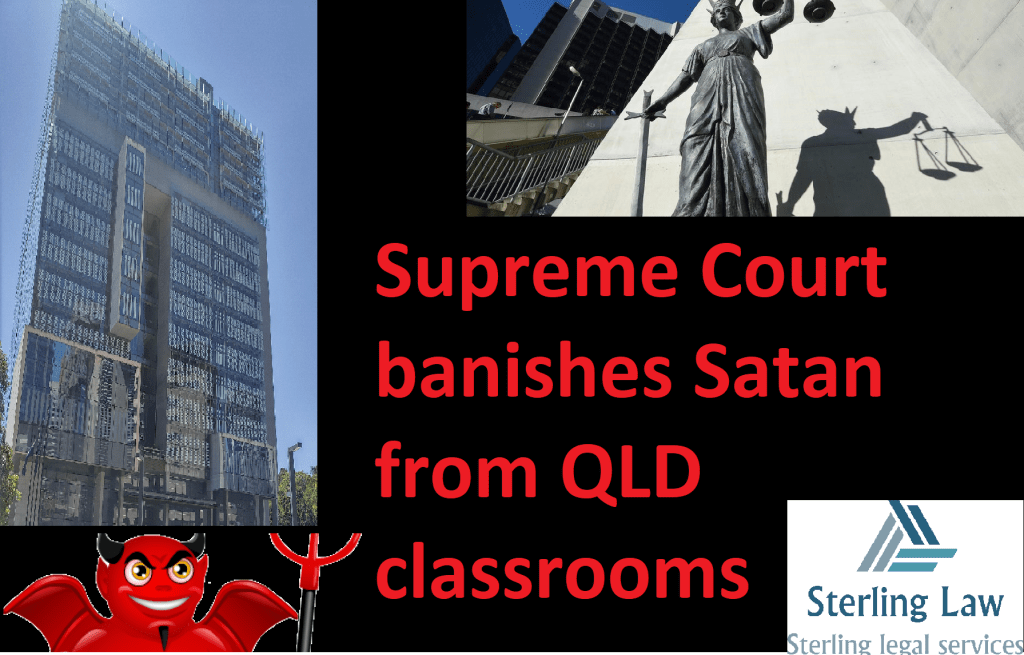 The Queensland Supreme Court has in effect refused to allow the Noosa Temple of Satan to provide religious instruction to children.

The Noosa Temple of Satan is an unincorporated association preaching Satanism in Queensland.

The applicant, Trevor Bell, is a member of  the Noosa Temple of Satan.

In March 2021, Bell and Robin Bristow, a fellow member of the Temple, applied for approval to deliver Satanic religious instruction at four Queensland State schools. Their application was refused on the ground that the Temple “has no entitlement to provide religious instruction” because it “is not a religious denomination or society for the purposes of” s 76(1) of the Education Act.

Bell sought a statutory order of review in relation to that “decision” under Part 3 of the Judicial Review Act 1991 (Qld) and, further, orders setting the “decision” aside along with a declaration to the effect that the Noosa Temple of Satan is a religious denomination or society for the purposes of s 76 of the Education Act.

Section 76 of the Education (General Provisions) Act 2006 provides that:

76 Religious instruction in school hours
(1) Any minister of a religious denomination or society, or an accredited representative of a religious denomination or society, which representative has been approved by the Minister for the purpose, shall be entitled during school hours to give to the students in attendance at a State school who are members of the denomination or society of which the person is a minister or the accredited representative religious instruction in accordance with regulations prescribed in that behalf during a period not exceeding 1 hour in each week on such day as the principal of that school appoints.
(2) Instruction in accordance with a regulation may be given in State primary and special schools during school hours in selected Bible lessons.
(3) A separate reading book shall be provided for such purpose.
(4) Instruction of a kind mentioned in subsection (2) is not to include any teaching in the distinctive tenets or doctrines of any religious denomination, society or sect.
(5) Notwithstanding anything in this section, any parent of a student in attendance at a State school may withdraw such student from all religious instruction in such school by notification in writing to the principal that the parent desires the student to be so withdrawn.
(6) The provisions pursuant to this section shall not apply or extend to students enrolled in the preparatory year at a State school.

Section 4 of the Judicial Review Act 1991 provides that:

In this Act—
“decision to which this Act applies” means—
(a) a decision of an administrative character made, proposed to be made, or required to be made, under an enactment (whether or not in the exercise of a discretion); or
(b) a decision of an administrative character made, or proposed to be made, by, or by an officer or employee of, the State or a State authority or local government authority under a non-statutory scheme or program involving funds that are provided or obtained (in whole or part)—
(i) out of amounts appropriated by Parliament; or
(ii) from a tax, charge, fee or levy authorised by or under an enactment.

Section 20 of the Judicial Review Act 1991 provides that:

20 Application for review of decision
(1) A person who is aggrieved by a decision to which this Act applies may apply to the court for a statutory order of review in relation to the decision.

In The Church of the New Faith v The Commissioner of Pay-Roll Tax (Vic), Mason ACJ and Brennan J of the High Court held that:

“… for the purposes of the law, the criteria of religion are twofold: first, belief in a supernatural Being, Thing or Principle; and second, the acceptance of canons of conduct in order to give effect to that belief, though canons of conduct which offend against the ordinary laws are outside the area of any immunity, privilege or right conferred on the grounds of religion.”

In the same case, Wilson and Deane JJ held that belief in the supernatural was “one of the more important indicia of a ‘religion”’ and that another is “that the ideas are accepted by adherents as requiring or encouraging them to observe particular standards or codes of conduct or to participate in specific practices having supernatural significance”.

In Griffith University v Tang [2005] HCA 7; (2005) 221 CLR 99, the High Court by a majority held that academic decisions of a university, such as whether to enrol or confer a degree were not subject to judicial review as such decisions were not “under an enactment” under the Judicial Review Act 1991.

In Lyons v Queensland [2016] HCA 38; (2016) 259 CLR 518, Gageler J of the High Court held that the entitlement for administrative review does not allow for any “administrative choice”; the requirements are “either met or not met independently of any action, inaction, knowledge or opinion of a person administering” the relevant Act.

Justice Martin Burns considered that as s 76(1) of the Education Act does not confer any decision-making powers, it does not found a “reviewable decision” under the Judicial Review Act 1991.

Burns J held that s 76(1) does not allow for any “administrative choice” as the requirement of there being a religious denomination or society was not met, independently of any action, inaction, knowledge or opinion of a person administering the Education Act.

On the issue of whether the Temple is a religious denomination or society, Burns J indicated he was most unimpressed with the Application:

[46] Apart from Mr Bell and Mr Bristow, only one other person (the graphic designer) was identified by the evidence as a member of the Temple. Reliance on Facebook followers and page likers as members of the Temple and therefore adherents is an absurd notion. Similarly, reliance on the sending by three parents of emails to school principals as some measure of support for the assertion that the Temple was comprised of some followers who were interested in Satanism is unsound because there is no evidence that any of those parents were members of the Temple.
[47] The Temple has no genuine connection to anything pertaining to religion. There is certainly no evidence of a shared belief in a supernatural being, thing or principle, let alone canons of conduct to give effect to such a belief. To the extent that Mr Bell submitted that the Temple amounted to a “religious society”, no common element pertaining to or concerned with a religion (or religions) was in evidence. Indeed, as best I can ascertain on the evidence, the identified members of the Temple are wholly irreligious. None of this should be surprising because the Temple was not formed (and nor has it been conducted) as a religious denomination or society; the sole reason for its existence was (and remains) to push a political barrow.
[48] It was therefore concerning to wade through what was advanced about the Temple to the school principals, the Deputy Director-General and this court. For example, it was claimed in the Forms that the “Satanic Religious Instruction” to be provided to students will include “information about the religion of Satanism, including belief in Satan as a supernatural being, the canons of conduct and the tenets”. In Mr Bristow’s letter to the Deputy Director-General of 12 March 2021, the claim was made that “[w]e are a religion” and that the Temple was a “church” with a “religious purpose”. In his affidavit, Mr Bristow deposed that the Temple was “devoted to the education, practice, celebration and promotion of the religion of Satanism” and that the “Temple’s purpose” included the promotion of a “belief in Satan as a supernatural spirit” and a “commitment to follow the example of Satan”. Then, Mr Bristow affirmed that the “supernatural belief of Satan that the Temple aims to promote is the Satan of the Bible” and that “[t]his is the supernatural spirit we will preach to our students in religious instruction classes.”
[49] Aided by Mr Bell and perhaps another, Mr Bristow’s attempt to obtain approval to deliver “Satanic” religious instruction in State schools was nothing more glorified than a base political stunt. His persistence with that attempt through the medium of this proceeding has resulted in a deplorable waste of the resources of the State which had to be marshalled in opposition to the relief sought and the needless allocation of court time and resources to deal with it.

The application for judicial review was dismissed.
Bristow was directed to show cause within fourteen days why a copy of the affidavits read on the hearing of the application, the exhibits tendered at that hearing, the transcript of his oral evidence at that hearing and the judgment should not be provided to the Director of Public Prosecutions (Qld) or the Commissioner of the Queensland Police Service to consider whether a prosecution should be commenced in relation to the affidavit he affirmed on 13 May 2021 and/or the evidence he gave at the hearing.
Conclusion
This decision of the Supreme Court of Queensland has in effect prevented the Noosa Temple of Satan from teaching its beliefs to children in Queensland. The consequence of this decision is that exorcisms on Queensland kids will thankfully be avoided.

Whether Robin Bristow gets prosecuted for his evidence remains to be seen.