Connie-Lee Rose Williams has been refused leave to appeal against her sentence for one count of dangerous operation of a vehicle, causing death whilst adversely affected by an intoxicating substance and excessively speeding. 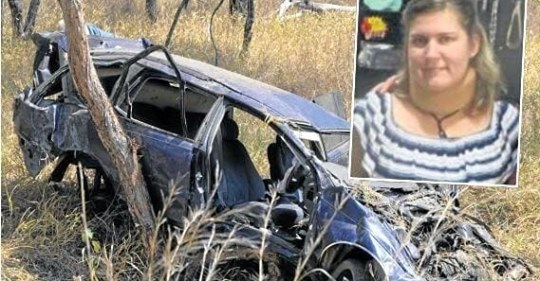 On 20 September 2017, Connie-Lee Rose Williams drove a motor vehicle on the Bruce Highway, north of Gin Gin which left the road and impacted at high speed with a culvert, and subsequently a tree. Her husband and her five year old son were both ejected from the vehicle and lost their lives. Neither wore seatbelts.

An investigation of the collision established that the motor vehicle had failed to negotiate a sweeping curve and left the road at a minimum speed of 171 kilometres per hour.

Immediately prior to leaving the roadway, Williams was observed to engage in a protracted course of dangerous driving. Other road users had been required to take evasive actions to avoid a collision.

At the time of the collision, Williams was travelling upon a sealed bitumen road, divided by audible double continuous lines. The weather was fine and clear. The road surface was dry. Visibility was good. The motor vehicle was in satisfactory mechanical condition. A subsequent examination found no faults which would have contributed to the incident.

Williams, who was restrained by a seatbelt, sustained injuries as a consequence of the impact. Blood specimens taken from Williams upon arrival at hospital revealed the presence of both amphetamines and methylamphetamine at levels likely to affect her ability to safely drive a motor vehicle. A search of the motor vehicle located a clip seal bag containing 1.65 grams of pure methylamphetamine.

328A Dangerous operation of a vehicle

(4) A person who operates, or in any way interferes with the operation of, a vehicle dangerously in any place and causes the death of or grievous bodily harm to another person commits a crime and is liable on conviction on indictment—

(a) to imprisonment for 10 years, if neither paragraph (b) nor (c) applies; or

(b) to imprisonment for 14 years if, at the time of committing the offence, the offender is—

(i) adversely affected by an intoxicating substance; or

(iii) taking part in an unlawful race or unlawful speed trial; or

(c) to imprisonment for 14 years, if the offender knows, or ought reasonably know, the other person has been killed or injured, and the offender leaves the scene of the incident, other than to obtain medical or other help for the other person, before a police officer arrives.

This offence is mentioned in schedule 1 of the Penalties and Sentences Act 1992 (Qld).

A conviction for a serious violent offence has the consequence that 80% of the sentence must be served before the offender is eligible for parole.

Section 161A(3) of the Penalties and Sentences Act relevantly provides that:

161A When an offender is convicted of a serious violent offence

An offender is convicted of a serious violent offence if—

(i) convicted on indictment of an offence—

(A) against a provision mentioned in schedule 1; or

(B) of counselling or procuring the commission of, or attempting or conspiring to commit, an offence against a provision mentioned in schedule 1; and

(ii) sentenced to 10 or more years imprisonment for the offence, calculated under section 161C.

Section 161B of the Penalties and Sentences Act 1992 (Qld) relevantly provides that:

161B DECLARATION OF CONVICTION OF SERIOUS VIOLENT OFFENCE

(a) convicted on indictment of an offence—

(i) against a provision mentioned in schedule 1; or

(ii) of counselling or procuring the commission of, or attempting or conspiring to commit, an offence against a provision mentioned in schedule 1; and

(b) sentenced to 5 or more, but less than 10, years imprisonment for the offence, calculated under section 161C;

the sentencing court may declare the offender to be convicted of a serious violent offence as part of the sentence.

(5) For subsections (3) and (4), if an offender is convicted on indictment of an offence—

(a) that involved the use, counselling or procuring the use, or conspiring or attempting to use, violence against a child under 12 years; or

(b) that caused the death of a child under 12 years;

the sentencing court must treat the age of the child as an aggravating factor in deciding whether to declare the offender to be convicted of a serious violent offence.

Section 161C of the Penalties and Sentences Act 1992 (Qld) ) relevantly provides that the specified years of a sentence under Sections 161B(3) is the number of years imposed for the Schedule 1 offences calculated as at the day of sentence.

Williams’ plea of guilty to the offence was entered on the basis that she accepted she had deliberately engaged in a course of dangerous driving over a protracted period, which was hazardous to the safety of herself, her passengers and other road users. That dangerous driving included driving on the wrong side of the road, over double white lines, whilst excessively speeding and being significantly adversely affected by methylamphetamine, in circumstances where she was aware that her passengers, including her young son, were not restrained by seatbelts.

District Court Judge Moynihan QC acknowledged the early plea of guilty but described Williams’ driving as involving the deliberate engagement in an extended course of reckless and dangerous driving on a major highway, endangering a number of people, with catastrophic consequences, particularly to her husband’s family. This dangerous driving occurred in circumstances where Williams was found to have both amphetamine and methylamphetamine in her blood, at levels enough to adversely affect her driving. Her observed conduct at the scene was also consistent with amphetamine use.

Judge Moynihan QC had regard to numerous mitigating factors: that Williams was 33 years of age at the time of the offence, with no criminal history and a limited traffic history; that she had pleaded guilty in a timely way, facilitating the administration of justice; that she had expressed remorse; her history and presentation were consistent with the presence of a number of psychological disorders, with the possibility of a potentially undiagnosed head trauma; that she had herself suffered significant physical injuries and had to live with the loss of both her husband and her son; and that she was separated from her two daughters and that this ongoing separation would have an adverse impact upon her and her daughters.

However, Judge Moynihan QC DCJ ordered Williams be imprisoned for nine years and declared the offence a serious violent offence, observing that:

“The factors I consider that make it a more serious example of the offence and warrant the declaration are: the extended distance over which you drove dangerously, the inherently dangerous nature of the manoeuvres you made on a number of occasions, the number of innocent members of the community you exposed to the real risk of serious injury or death by your deliberate and reckless conduct, that you allowed your son to travel unrestrained in the vehicle when you determined to drive the way you did whilst adversely affected by methylamphetamine and your deliberate and reckless conduct has taken the lives of two people.”

Williams applied for leave to appeal against her sentence, contending that it was manifestly excessive as circumstances of the offence did not involve sufficiently serious features to warrant the imposition of a sentence of nine years imprisonment, with a declaration that she had been convicted of a serious violent offence. She also argued that too little weight had been given to the mitigating factors.

“The applicant’s dangerous driving involved not only a protracted course of driving which placed other members of the public at significant risk. It involved a deliberate course of driving at excessive speed on the wrong side of a busy highway in areas where there were present double white lines, at a time when the applicant was adversely affected by intoxicating substances and aware that each of her passengers were unrestrained in the motor vehicle. Such a course of conduct was rightly described as involving an occasion of serious dangerous driving.”

Boddice J held that comparable authorities supported a conclusion that a proper exercise of the sentencing discretion for such a serious occasion of dangerous driving would have included a sentence of imprisonment of at least ten years, with the consequence that there would have been an automatic declaration she had been convicted of a serious violent offence. As a result, a sentence of nine years’ imprisonment, with a declaration Williams had been convicted of a serious violent offence, was a sentence at the lower end of the sentences applicable to this serious offending.

Sofronoff P and McMurdo JA agreed with Boddice J. As a result, the application for leave to appeal was refused.

This case demonstrates how deliberate dangerous driving that causes death can expect to be severely punished, even when there is a lack of criminal history and/or an early guilty plea.  Connie-Lee Rose Williams intentionally drove under the influence of illegal drugs, at speeds well over the legal limit on the wrong side of the highway for a long period, knowing full well her husband and son were not wearing seat belts. The horrific consequences were readily foreseeable, and warranted a substantial sentence of actual imprisonment to reflect the gravity of the offending.

2 thoughts on “No discount for dangerous death-causing drug driver”