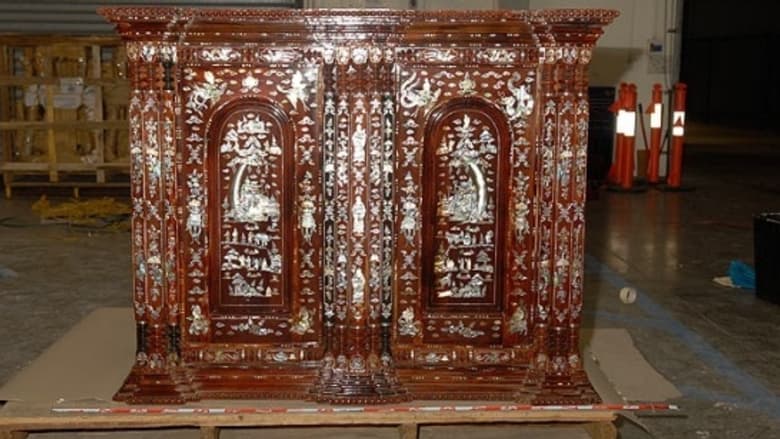 The co-defendants including Mr Pham were tried for attempting to possess a commercial quantity of an unlawfully imported border controlled drug namely heroin. The heroin had been brought to Brisbane from Vietnam, concealed inside 2 wooden altars in a shipping container, on 28 October 2012.

The altars had been intercepted on 6 November 2012 by Customs and other Commonwealth authorities without the knowledge of the co-defendants. The interception was made after Customs detected 78 packages of white powder hidden inside the altars. The white powder was forensically analysed, and subsequently discovered to be pure heroin.

The altars were then delivered to a property in Robertson on 9 November 2012 where they remained overnight before being collected and moved by the co-defendants, including Mr Pham using a hire trailer towed by a Victorian registered Nissan X-Trail. The X-Trail had been hired by one of other the co-defendants. Mr Pham was not driving the X-Trail, but was following it in another vehicle with another of the co-defendants.

It was whilst the co-defendants were inside the shed dismantling the altars and recovering the packages that the shed was raided by the police, who apprehended the co-defendants, including Mr Pham, at the scene.

Mr Pham was convicted of the charge of attempted possession of a commercial quantity of unlawfully imported border controlled drugs and sentenced to 12 years imprisonment.

Mr Pham then appealed his conviction.

1. The verdict reached by the jury was unsafe and unsatisfactory.

2. The learned trial judge failed to direct the jury in accordance with the elements of the offence.

3. The appellant’s solicitors had an actual, or at least an apparent, conflict of duties caused by the same firm of solicitors acting for the co-defendants.

4.The learned trial judge erred in not directing the jury to consider whether the evidence established the defence provided for by sub-section 307.5(4) of the Criminal Code.

5. The appellant’s solicitors had an actual, or at least an apparent, conflict of duties caused by the same firm of solicitors acting for the co-defendants. The appellant was thereby deprived of a fair trial.

There were specific particulars cited by Mr Pham for Ground 2 to justify his argument, which are detailed and extensive, and can be summarised as follows:

2.1 The learned trial judge erred in directing the attention of the jury to two different substances when considering the elements of the offence….

2.2 … the learned trial judge erred by directing the jury to decide whether the appellant intended to have custody or control of the contents of the altars as they were on 10 November 2012.

2.3 … the learned trial judge erred by leaving the case to the jury.

2.4 In the alternative to 2.3 above, … the learned trial judge erred by failing to direct the jury that it was necessary in order to convict the appellant for the jury to be satisfied beyond reasonable doubt that the appellant intended that the contents of the altars had been unlawfully imported and amounted to a commercial quantity of a border controlled drug… and the learned trial judge erred in not directing the jury to consider whether the evidence established the defence provided for by sub-section 307.5(4) of the Criminal Code.

Mr Pham also applied to the Court for leave (permission) to adduce (provide new) relevant evidence to prove Appeal Ground 4 that the conduct of his case by his former lawyers deprived him of the chance to receive a fair trial, and that therefore his conviction was wrongfully entered against him. The application for leave to adduce the evidence was ultimately dismissed unanimously by all of the 3 judges hearing the appeal.

The Court of Appeal’s Decision

The appeal against conviction by Mr Pham was dismissed by the Court of Appeal, and Mr Pham’s application for leave to adduce evidence was also dismissed.

With respect to the grounds alleging misdirection by the trial judge McMurdo P held that:

“… In light of the evidence in and the appellant’s conduct of the case, and the judge’s comprehensive directions to the jury as to the elements of the offence, together with her Honour’s subsequent discussion of the question trail, the appellant has not demonstrated that the judge erred in framing questions 1 and 4. The appellant has not demonstrated any miscarriage of justice arising from those questions. This ground of appeal is not made out.”

The reference here to questions 1 and 4 is a reference to a questionnaire the trial judge suggested the jury could use to assist it in considering the evidence before it for its verdict. The trial judge however did not direct the jury that this was the only suitable way in which the evidence could be considered in order for the jury to reach a final verdict…

It was not his case at trial that he did not know the border controlled drug he was attempting to possess was imported. As the appellant did not meet the evidentiary onus placed on him by s 307.5(4) as informed by s 13.4(b), the judge was correct in not directing the jury on that defence. This ground of appeal is not made out.”

With respect to Ground 1 McMurdo P held that:

“The appellant contends that the evidence at his trial was insufficient to support an inference beyond reasonable doubt that he knew or believed the altars contained a border controlled drug rather than some other illicit goods like cigarettes or tobacco….

As this Court has found, that verdict was not unreasonable or unsupported by the evidence. The jury were also entitled to reject as unreasonable the possibility that the appellant may have assisted and been prepared to keep silent because he was afraid or for some other reason, and his claim that he did not believe the altars contained unlawfully imported border controlled drugs rather than something less sinister like tobacco.

After reviewing the whole of the evidence admissible against the appellant, I am persuaded that the jury were entitled to infer beyond reasonable doubt that he attempted to possess a commercial quantity of the border controlled drug, heroin, when he assisted in moving the altars from Robertson to Munruben and when he removed the contents of the altars at Munruben. It follows that this ground of appeal is not made out.”

With respect to Ground 5:

“Mr Pham relied on the case of R v Szabo, where the court in that case used the following test to determine whether the defendant in that matter had suffered a miscarriage of justice. The test is whether ‘An ordinary fair-minded citizen in the position of the appellant, with knowledge of all relevant circumstances, would have at least a lingering suspicion that the appellant did not have the benefit of fair play’.”

“As I have explained, the present case differs from Szabo, where Mr Szabo deposed that, had he known of his defence counsel’s recent past sexual relationship with the prosecutor, he would have changed his barrister. By contrast, this appellant apparently gave informed, signed instructions that he did not wish to give evidence in his trial, apparently because Mr Tran was to give evidence which would be helpful to the appellant. That is what transpired.

His counsel then had the advantage of addressing the jury after the prosecutor. The appellant does not contend that any of the evidence led in his joint trial with Mr Tran, particularly that part of Mr Tran’s evidence which implicated him in the physical element of the offence, was untrue. Nor has he deposed that, had he known the details of Mr Tran’s evidence in advance, even those parts that inculpated him, he would have conducted his own trial differently.

In these circumstances, a fair-minded observer, with the knowledge that Mr Tran and the appellant were represented by different solicitors from Bosscher Lawyers instructing different barristers, would not entertain a reasonable suspicion that justice had miscarried. This ground of appeal is not made out.”

Legal Aid Queensland decided in light of the arguments raised by Mr Pham in his appeal against his conviction that its previous policy on law firms acting concurrently for 2 or more co-accused was unrealistic and dangerous.

The previous policy position was that it was permissible for a law firm to act concurrently for 2 or more co-accused so long as the law firm acted in a professional manner when handling the cases of the co-accused, and did its best to ensure that it did not compromise one co-accused’s rights whilst attempting to uphold those of another co-accused.