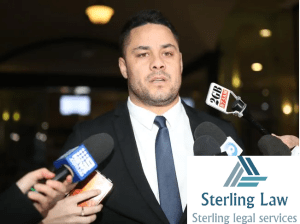 This blog reported when Rugby league star Jarryd Hayne was found guilty of two counts of sexual intercourse without consent.

His first trial in Newcastle last year ended in a hung jury, however the jury in his second trial found him guilty of performing oral and digital sex on the complainant without her consent.

During her evidence, which was replayed from Hayne’s first trial, the complainant said she refused to consent to sex because the ex-Parramatta fullback had a taxi waiting outside as there was “no way” she was going to consent to sex.

Section 61HA(3) of the Crimes Act (NSW) provided that:

Judge Syme directed the jury with respect to s 61HA(3)(c) of the Crimes Act, and this led to the jury finding Hayne guilty.

Hayne was sentenced to five years and nine months imprisonment with a non-parole period of 3 years and eight months.

Judge Syme said “I do not accept he was not aware that she was attempting to push him away and trying to physically resist him… it was very clear she said no several times”.

“I have found the offender was fully aware that the victim was not consenting and went ahead anyway. His decision to do so increases the objective seriousness,” she said.

Hayne maintained he spoke the truth, and appealed his convictions.

Today, Hayne has won an appeal against his convictions, but a re-trial has been ordered, which means he could be convicted again.

The Court of Appeal (Bathurst CJ, Harrison J and Wilson J) held that Judge Syme had erroneously directed the jury with respect to s 61HA(3)(c) of the Crimes Act, and that this resulted in a miscarriage of justice.

It is likely Hayne will be granted bail following today’s result.

Conclusion
Todays result means that a third trial is likely to take place in what will have been a long-running legal battle.